From the first impression, stunning lobbies of luxury hotels evoke interesting stories behind. Let’s hear what they should tell you throughout picturesque journeys. 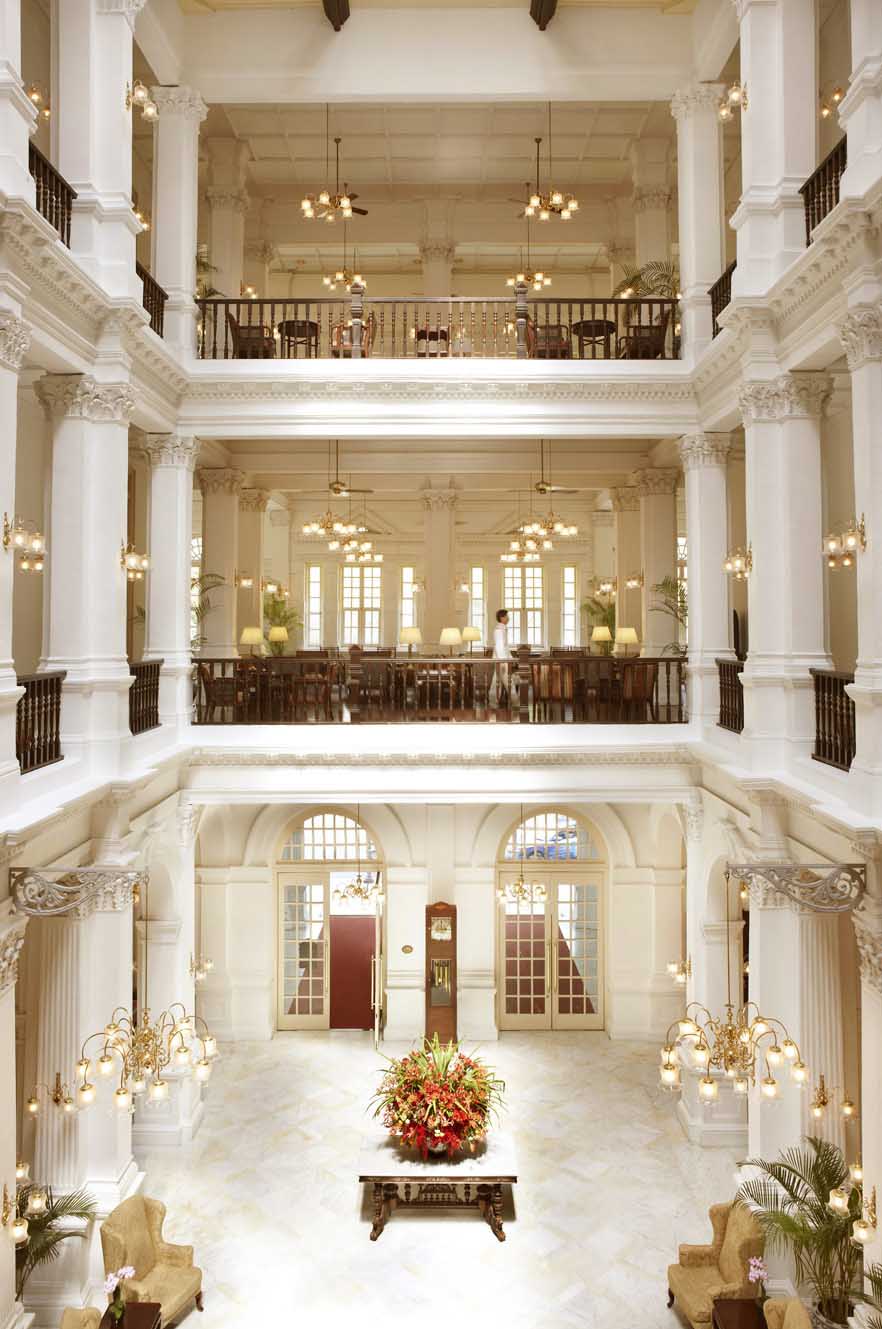 Coming into operation since 1887, Raffles Hotel Singapore became an ideal icon for the romance of the Far East which harmoniously blends luxury, history and colonial design. Not only bringing a glimpse of a veritable oasis in the city state, such luxury hotel also offers you a resplendent lobby from your first look. Being as “airy as a birdcage”, its splendor ties up with white marble colonnades that encircle an atrium by soaring across three floors.

Boasting as one of the world’s largest hotel lobbies with a lively and modern social space, Hyatt Regency San Francisco amazes both business and leisure travelers by its 40-feet high Eclipse which is a geodesic sphere consisting of 1,400 pieces of curved metal tubing. Besides the bar and reception areas, interior elements in the lobby also contribute to emphasize the grandeur of the atrium and show the bold of architectural and artistic statements in harmony with an modern flair. 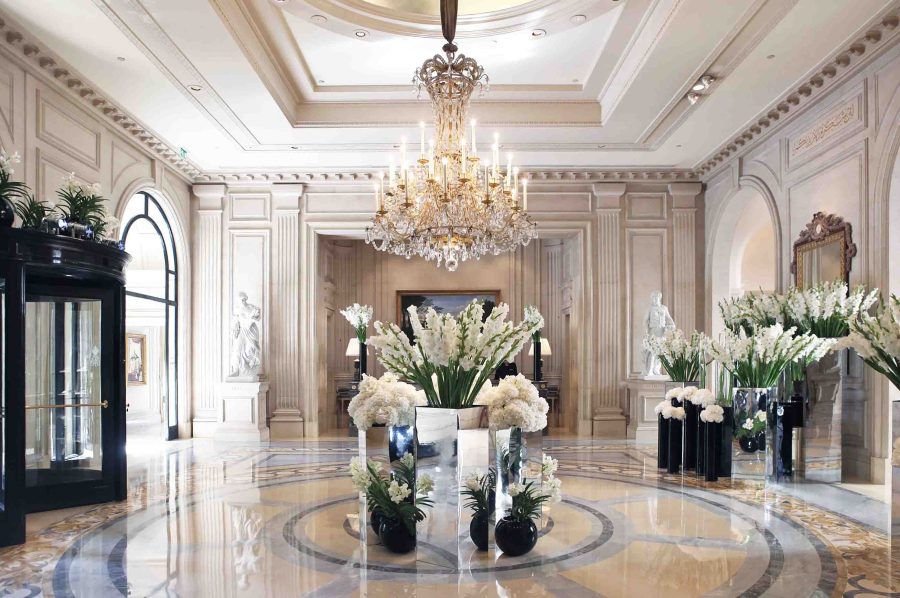 With a weekly order of 12,000 flowers from Amsterdam, Four Seasons Hotel George V, Paris is well-known by its lavish and innovative floral designs, especially in the lobby. The  design themes will be changed every three weeks in an effort to create unforgettable experience for guests each time they visit. 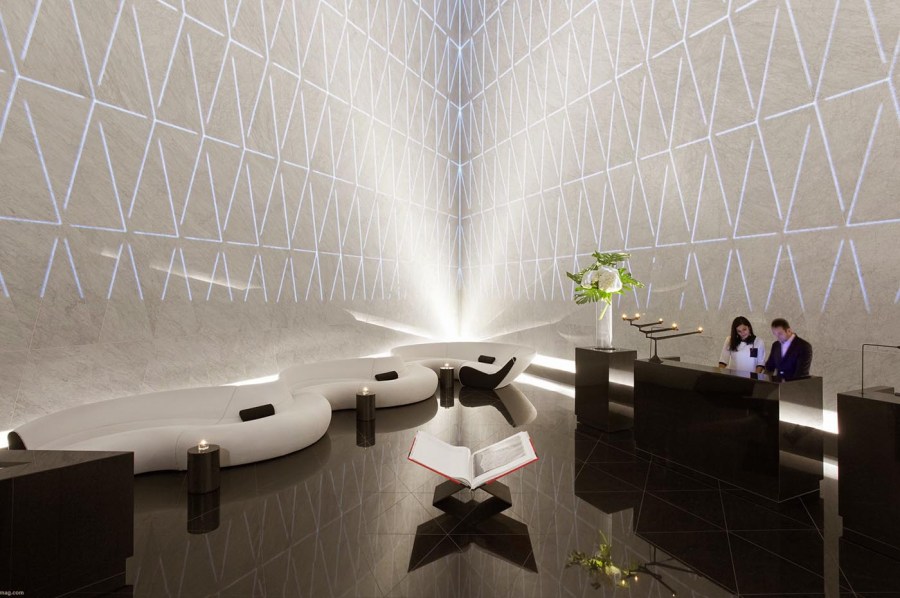 An unique triangular corner of ME London

ME London seems to reflect the passion of human about the future in which its lobby is constructed like a pyramid with a single triangle for the glorious shower of sunlight pouring from the top of the building onto the ground. 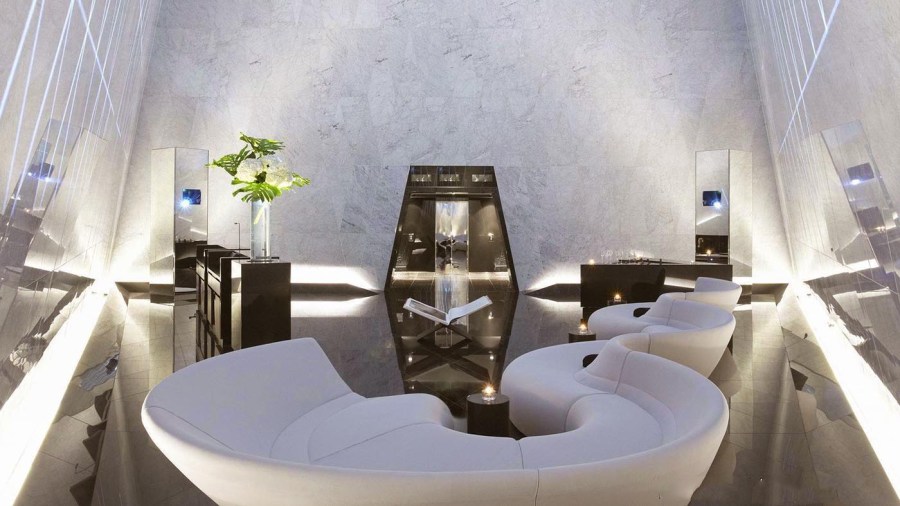 An overview of the pyramid lobby

One more special point is that lots of patterns shimmering on the walls are changed nightly from jellyfish to stars. 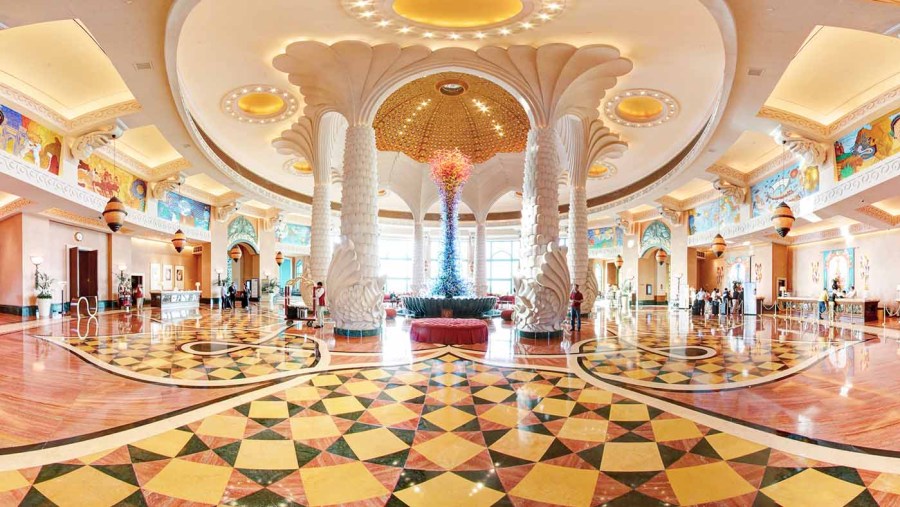 Located on the revolutionary manmade island of The Palm Jumeirah, the 1,539-key Atlantis The Palm Dubai is inspired by the mythical legend of the lost city named Atlantis with uninterrupted views and stunning architecture to create a luxurious haven for travellers. The legendary world of Atlantis The Palm Dubai opens from the first sight via the mind-boggling design of the Grand Lobby including a 9-meter crystal sculpture which rises below the structure’s grand dome and symbolizes for the energy source of the hotel. 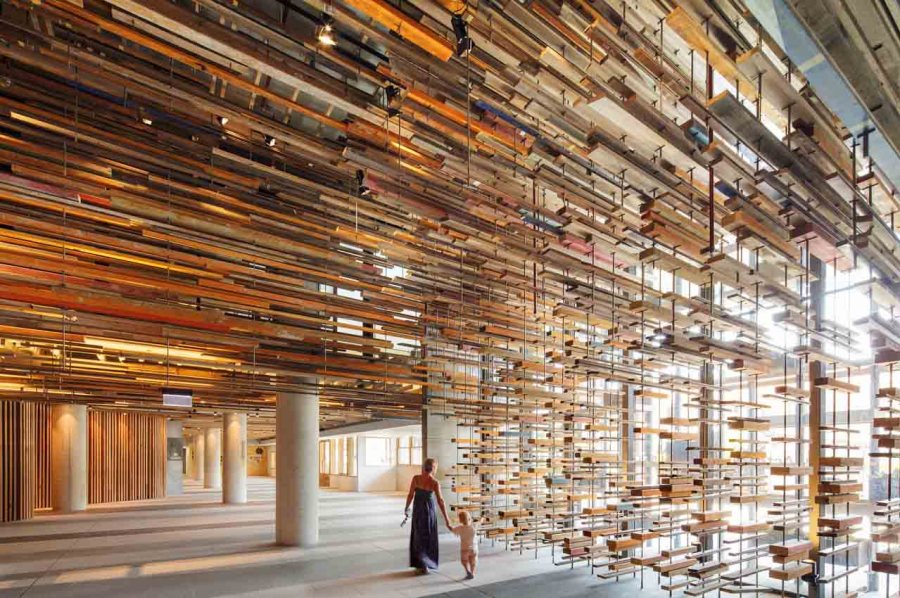 The world of woods inside Hotel Hotel

As part of Nishi, a mixed-use building in Canberra’s NewActon precinct, Hotel Hotel is the result of an intense collaboration between more than fifty designers, architects and artists worldwide. This signature property may impress you by more than 2,150 pieces of recycled timbers which are arranged parallel together throughout the hotel including its lobby. Don’t lose yourself as immersing in the forest of woods. 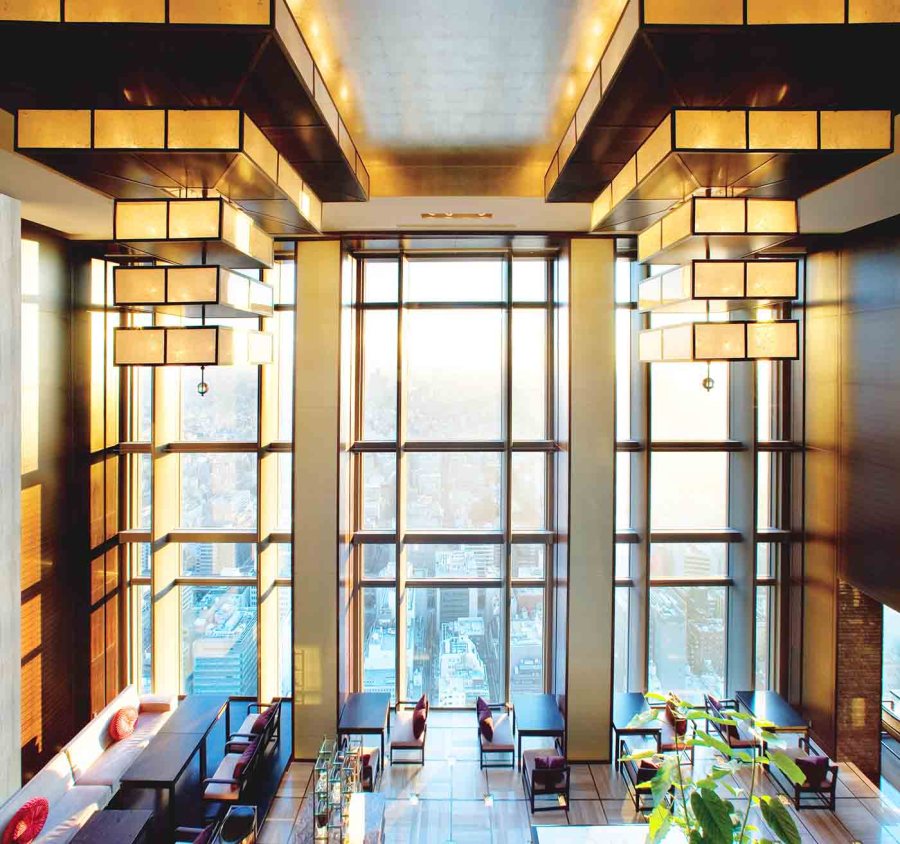 The iconic Mandarin Oriental in Tokyo, Japan has a lobby that’s actually on the hotel’s top two floors offering incredible views of Tokyo, in addition to amazing experience at Michelin-starred restaurants and a range of relaxing and rejuvenating treatments and therapies.

According to the design team, the term “French Irony” was coined throughout the design of Sofitel Dubai Downtown to describe unique applications of leather and acrylic panels, glass art and back-lit platforms that create an environment full of energy and an iconic French design. Therein, the lobby is completely novel design aesthetic that is timeless, contemporary and memorable. Based on 1950s & 1960s geometric op art movement from Victor Vasarely, bold patterns, quirky styles and art are incorporated into its architecture accordingly. 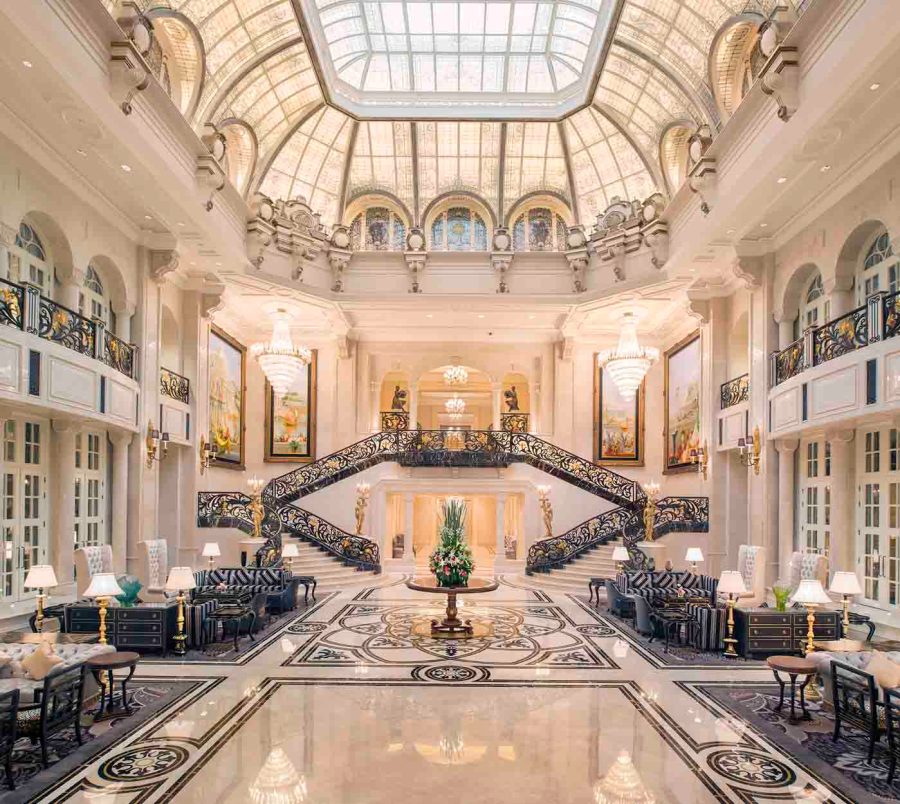 Look like magnificent castles in fairy tales that you used to read during your childhood, The Castle Hotel, Dalian is an imposing presence with its palatial Bavarian-style design sweeping panoramic views of both the sea and the city. Its Grand Lobby may take you to another world where fantasy can become reality with marble stones under your feet.

Hyatt Regency Cleveland at the Arcade 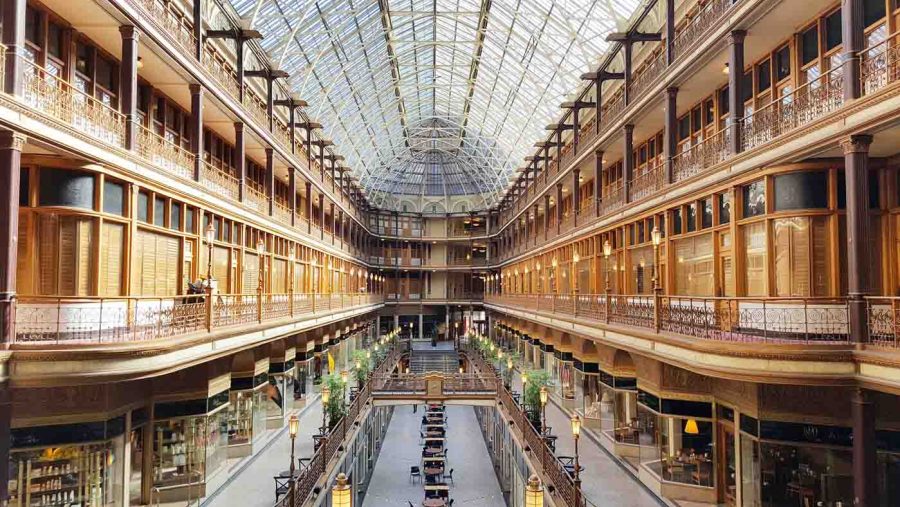 One of the most largest hotel lobbies worldwide at Hyatt Regency in Cleveland, Ohio

The Hyatt Regency in Cleveland, Ohio occupies an arcade built in 1890 that features iron and glass vaulted ceilings, allowing sunlight to pour in throughout the day. 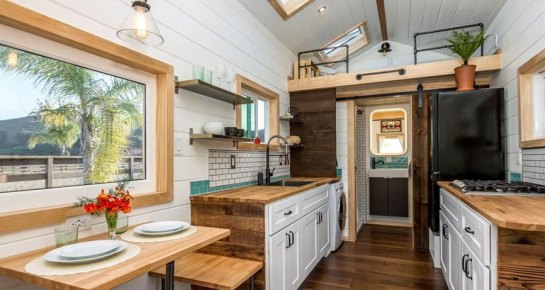 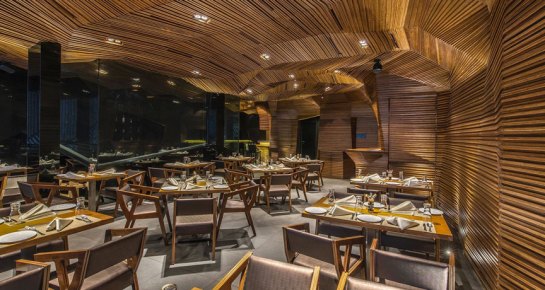 10 of the world’s most stunning bars and restaurants

A good interior design can do as much for a cafe, restaurant or bar ... 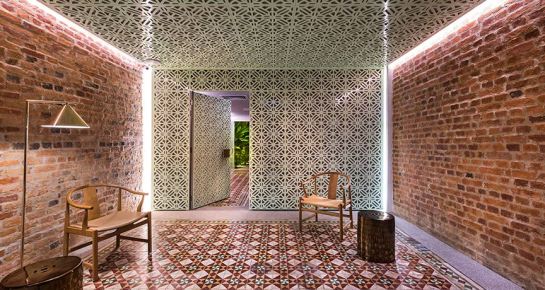 The past, in all cases of boutique properties below, is ingeniously used as an ... 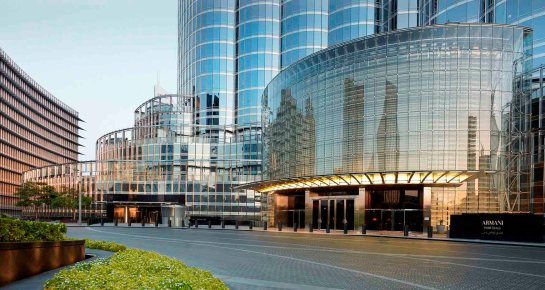 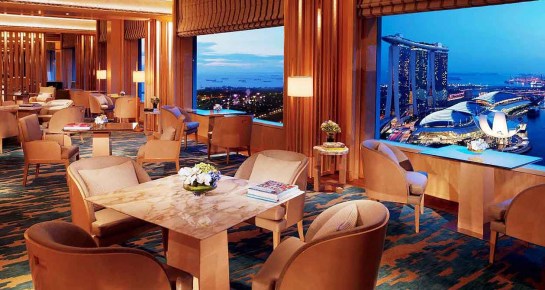 Exclusive privileges and tailor-made services may be not the whole story to be told ... 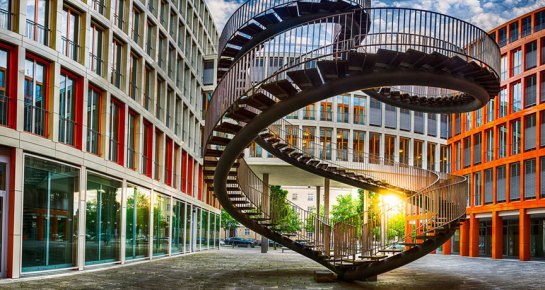 Listen to stories of spiral staircases

“The world is like a grand staircase, some are going up and some are ...